Todorov's theory is a theory about the way films are structured. Most films follow this structure, although not all of them do. The theory is like this:

1. The film starts with everything being good, balanced, or normal.
2. This normality is disrupted, as something goes wrong
3. A character/characters realise that something has gone wrong, and decide to right it
4. An attempt, or attempts, are made to right the wrong
5. Everything is resolved, and life goes either back to normal or into a new version of normal.

An example of a film that fits into the theory is Up:

Another film that follows the theory is The Truman Show:

1. Truman lives his life, oblivious to his fake world
2. He realises that his world is all made up
3. He decides to escape and leave his 'world'
4. He attempts to escape, first by driving away, then by rowing away
5. Truman is allowed out of his fake world, and goes to live his new life

However, Memento doesn't fit into this structure, as it starts with the problems being resolved, and works backwards. The ending shows the same thing, and just before the ending, we see the beginning.
Posted by Hannah at 04:34 No comments:

Frequency of Cuts in an Extract

Frequency of Cuts in an Extract

I looked at the frequency of cuts in Casino Royale to analyse editing speed. Below is a graph showing my findings: 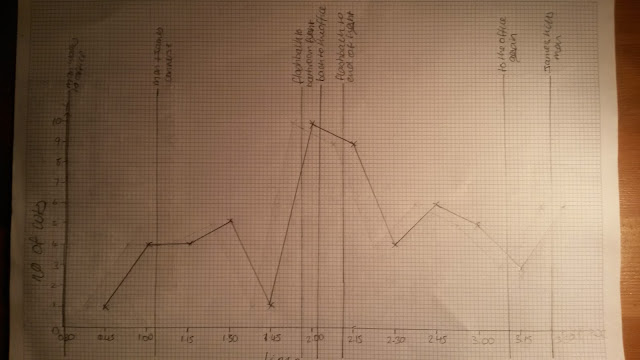 From this graph, I can see that the highest frequency of cuts occurred during the flashback scene when James Bond is shown fighting a man. This is because the scene was very action packed, so fast cuts made the scene seem confusing and panicked. The slowest frequency of cuts occurred when the man was walking to his office, and when he was talking to James. This was probably because there was little action, as nothing much was happening.
Posted by Hannah at 09:22 No comments:

We learnt about shot composition and the effect they have on the audience. Shot composition is about manipulating and setting the scene so that the viewer looks at a certain subject. We took pictures to test out and demonstrate these skills.

Framing is used to draw attention to a certain subject. This can be to show the importance of something, or to make a scene more interesting. There are 2 types of frames - man-made (a frame made by humans, for example an archway) or natural (a frame that occurs naturally, for example the mouth of a cave). They can frame a human or a non-human subject. Here are some examples of pictures we took, using man-made and natural frames, with human and non-human subjects. 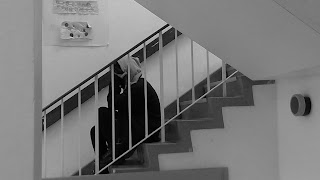 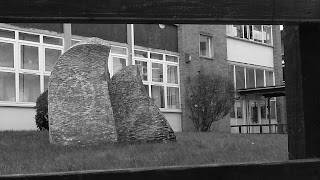 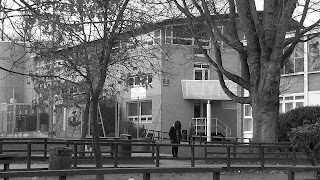 These are lines that lead the viewer's eyes to a certain subject or point. The lines do not have to be straight or obvious - it is more about the subtle manipulation to make the viewer see what is most important. 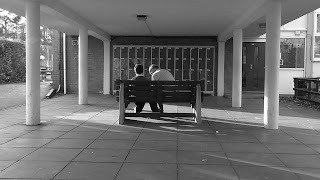 This is when the image is divided into equal thirds, both horizontally and vertically. This technique is more about making shots look more pleasing to the viewer. It is generally recommended to line up subjects or backgrounds with the third lines, as this makes the shot more aesthetically pleasing. The places where the shots intersect are called 'hot-spots', and placing subjects on these 4 hot-spots means that the viewer will look at these places first. 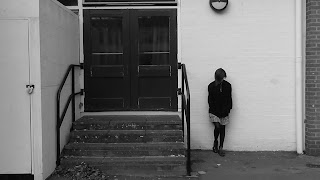 The BBFC stands for the British Board of Film Classification. They are an organisation that gives films age ratings to allow people to know whether a film is suitable or not. There are several age ratings, and the content of the movie determines its rating. However, the guidelines are not especially strict, and are generally only enforced in cinema viewings and DVD sales. The movies someone watches is entirely up to them or their parents/guardians. Here are the guidelines for age rating movies: 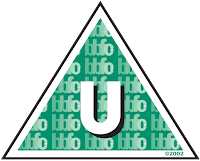 U stands for Universal, and can be watched by all. Most films with a 'U' rating are made for young children, generally under 4 years old. It may include: 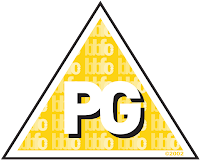 PG stands for Parental Guidance. This means that most people should be able to watch it, but some scenes my be unsuitable for young children. It suggests that parents should review the content of the film before showing younger children. Although the films are generally suitable for children, they may not have been expressly made for children. A PG film may include: 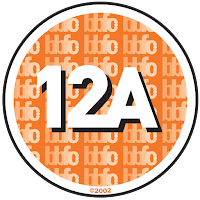 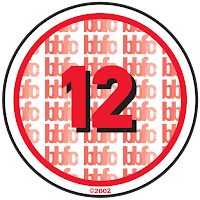 12 and 12A are very similar, but are used for different reasons. Both mean that the content should be suitable for people aged 12 and over. 12's are used for DVD ratings, and only people over 12 can buy them. 12A is used for cinema releases, and means that under 12s can enter if accompanied by an adult. A 12/12A film may include: 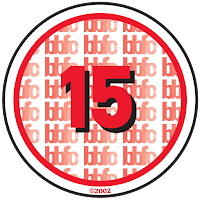 15 films are made for 15 year olds and higher. They include things that are not suitable for children or younger teens. 15 films may include: 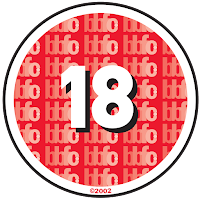 18 films can only be seen by adults. They are not suitable for children or teenagers in any way. They may include:

Although these are the general rules, context plays a huge part on the rating a film is given. Most films generally fit into the 12/15 categories, as this allows more people to access the film. The guidelines for ratings changes with society as things become more acceptable and normal.
Posted by Hannah at 09:52 No comments:

Our group decided that we wanted to do an action thriller opening, as it is a genre we are all familiar with, and one that has many conventions. We looked at some action thriller openings see what these conventions are. We looked at the openings for Bourne Identity, Casino Royale, and Memento, and found that there are many similarities between the openings.

We found that the music in the openings was often instrumental, using mainly string instruments. This is used in scenes where tension is wanted. When there is action (eg. end of Casino Royale clip) or things are getting dramatic (eg. end of Bourne Identity clip) the music becomes faster, and more instruments are added. Diegetic sounds are heard as well, although the music normally comes first. This can be speech (Casino Royale and Bourne Identity) as well as weather, or objects hitting each other.

The shot types used most often in the openings were long shots, close-ups and extreme close-ups. The long shots help establish the setting (Casino Royale) and/or atmosphere (Bourne Identity). The close-ups show emotions, and the extreme close-ups, which often focus on objects, show the importance of the objects (Memento). The movement in the openings are quite basic - they generally all only use camera movements to follow a person or object. Bourne Identity and Memento both use shaky movements, whereas Casino Royale is much smoother until the fight scene at the end.

The editing was relatively slow. In Memento, the first minute or so is one continuous shot, with the editing remaining fairly slow throughout the opening. The other two both also have fairly slow editing, even in Casino Royale during the fight scene. This slow edit pace creates tension in the viewer, even in the fight scene where the pace makes the viewer feel more nervous.

In terms of locations, they differ greatly. The Bourne Identity opening is set in the ocean, on board a fishing ship and out in the water itself. Casino Royale is set in an office in Prague, and in some toilets. Memento is set in some abandoned and neglected building. Overall, there is no linking theme, apart from the idea that they are all quite isolated areas.

The colour schemes in the clip were generally quite dark. The colours were occasionally stylized, for example the Casino Royale opening was entirely in black and white, with it becoming quite bright later on. In Memento as well, black and white is used for when the time skips back into the past. In Bourne Identity and Memento, the colours are quite dim and muted. Other than this, again, the colours vary greatly. Bourne Identity uses blue and yellow colours, Memento uses dark colours, and Casino Royale uses greys.

There are themes of violence and death in all three of these openings. Guns also feature in both Memento and Casino Royale. The main character is also seen in all of these, even if only in the distance (Bourne Identity). Bourne Identity and Casino Royale both take place in a foreign country or place, and none of the openings seem to take place in character's homes.
Posted by Hannah at 04:22 No comments:

I decided to look into movie genres to help me decide what genre to make my opening in. This is what I found out:

ACTION - films filled with action, often including chases, stunts, fights, and destruction. They are quite fast, and generally have simple, easy to understand plots, designed to allow the viewer to escape reality.

COMEDY - films made to make people laugh. They once again have simple plots, with often exaggerated characters or situations. There are lots of different types of comedies, including slapstick (physical comedy), parodies (which make fun of something else) and dark (satirical comedy).

ANIMATIONS - films that are animated. They can be hand-drawn, CGI, or claymation, amongst others. The stories vary greatly, and animation is sometimes incorporated with live action. However, animations are more commonly used for children or family films.

WESTERN - films set in the desert, or in the wild west. They are based around cowboys, and often include bad guys, shoot-outs, fights and adventures.

HORROR - films made to scare people. There are different types, but they generally involve a group of people being attacked by a monster/supernatural being/psychologically unstable human. They also often include violence, gore, and jump-scares.

THRILLER - films designed to keep audiences at the edge of their seat. They often include plot twists and tense situations. Thrillers are generally attached to another genre, for example action-thrillers. This means that the films involve themes from one genre, but are more tense and have more complex plot-lines.

SCIENCE FICTION - films that include futuristic or alien technology, places, or beings. They often cross over with other genres, including action, horror, and fantasy. They are quite imaginative, and their plots can range from simple to complex.

FANTASY - films that are full of imaginary places, beings, creatures, technology, and worlds. They are very creative, and the plots range greatly. However, they commonly include quests and evil vs good.

CRIME - films that involve gangsters or criminals of some kind. They often show the activities or lives of these people. There are different kinds, including stylish ones, comedy capers, or gritty ones.

FAMILY - films that are designed to be enjoyed by all members of the family, from young children to old people. They generally have simple plots and light-hearted stories, where a happy resolution is always reached.

HISTORICAL - films based in the past. They generally focus on a character, either factual or fictional, and their life, which can be ordinary or extraordinary. They are also sometimes based around past significant events, such as a war or a rebellion.

MUSICALS - films that incorporate song and dance as part of the story. The stories are often quite emotional, and generally end quite well. The plots are quite simple, and often end with 2 characters falling in love.
Posted by Hannah at 04:22 No comments:

I have recently been attending the BFI film academy at film oxford, and have been keeping a blog on what we are doing as part of my silver arts award. As well as making our own short films, we have also had talks from professionals in the industry, including a screenwriting session and VFX talk. Below is the blog that I am keeping. The course has given me lots of extra knowledge and experience which will help me with this course. Posts with a 'B.' are about the sessions and activities I have done.

The Blog
Posted by Hannah at 04:01 No comments: